This session is part of a multi-session series.
Full Schedule » 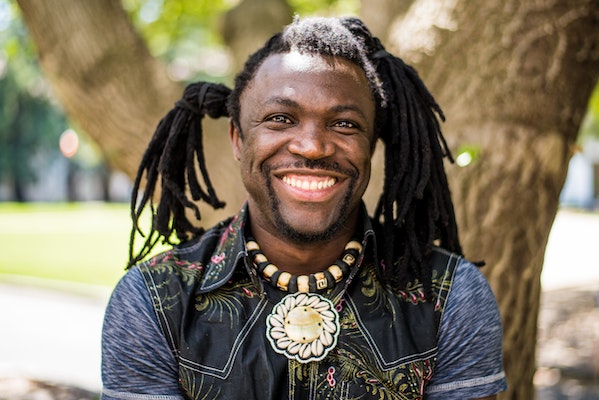 This event has ended.
Afro Rhythms Movement is a crossroad between contemporary dance and African-derived dance forms, with a focus on dance aesthetics from Central Africa and particularly from the Congo. The class introduces ethnic dance forms through a contemporary lens. This course will explore movements that form a springboard to contemporary dance grounded in ethnic dance aesthetics. The class conciliates tradition and modernity in the dance movement practice. This class incorporates techniques drawn from contemporary dance and the basic movement technique of various ethnic dance forms. Students will be introduced to the simple and specific movements through a specific warm up that would help their body prepare for polyrhythms and movement isolations. Inner rhythm and musicality embodiment are essential to this class.

Byb Bibene is a dance educator, choreographer and performer. He is the founder and artistic director of both Kiandanda Dance Theater and the Mbongui Square Festival.

Bibene’s innate technical and aesthetic sensibility is rooted in the culture and dances of the Republic of Congo. His professional foci are the interdisciplinary areas of theater, traditional, Afro-urban and contemporary dance. Bibene has performed internationally and toured throughout the world with companies originating from Africa, Europe and the United States.

Prior to training in Europe, Byb practiced the traditional arts in his home country, in the cities of Dolisie, Pointe-Noire, and Brazzaville, RC. This training was interrupted when Byb and his family became refugees during the 1997 civil war. Much of the focus of his work since this time has been to draw attention to the plight of war refugees in general, and those from Africa in particular.

Bibene has been nominated for two Isadora Duncan Dance Awards: Reconstruction, in collaboration with cellist and dance artist Chris Evans, and saxophonist David Boyce in the category of Creative Sound (2017) and Nkisi Nkondi-Sacred Kongo Sculpture in the category of Visual Work (2018). In 2017, Taboo and Heroes was nominated for a Kikwetu Award in Outstanding Choreography.

Bibene holds a Bachelor’s of Science degree in Economics/Finances from Marien Ngouabi University, Congo and an MFA in Dance Creative Practice (Dean’s Award for Academic Excellence) from Saint Mary's College of California. He is a lecturer of dance at UC, Berkeley.