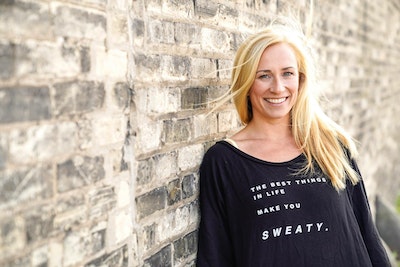 👋 I am Taryn Vander Hoop (she/her)

Taryn Vander Hoop, a lifelong student of movement, is a dancer, choreographer, and international yoga and dance teacher known for her long unique sequences and encouraging spirit. She helps her students find joy in movement and freedom and ease in the body and mind.

She graduated from the University of Wisconsin with a B.S. in Dance, English Literature, and Spanish and moved to NYC in hot pursuit of a career on the stage. Knowing her ultimate goal was to teach she made a 2-year pit-stop at NYU Tisch School of the Arts where she received an MFA in Dance Performance and Choreography. At Tisch, Taryn met her partner-in-crime, Sumi Clements, and they co-founded Summation Dance, an all-female modern dance company, now based in NYC and LA. The company has performed at notable venues, such as Brooklyn Academy of Music (BAM), Baryshnikov Arts Center (BAC), Jacob's Pillow, and Z-Space. For more on the company, check out summationdance.org


The practice of yoga has transformed Taryn's mind and body and she has been able to translate much of her yoga practice into her daily life. By finding her exhale on the mat, she was able to release tension from her body throughout the day and in her dancing. Mantra and meditation practice enhanced her focus, confidence, and performance on the many stages of life. The list goes on and on. Yoga has given Taryn more than she ever could have imagined and her mission is to help people find confidence and joy in movement coupled with fullness and mindfulness in daily life. Her aim as an educator is to help her students see fewer limitations and realize more possibilities.