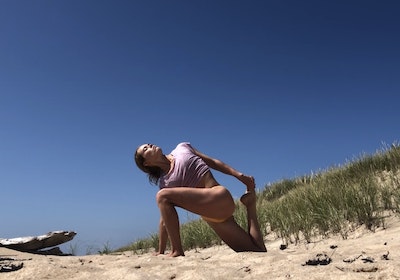 👋 I am Sylvia Channing

Sylvia has been studying yoga for over 15 years on the East End. While Colleen and Rodney have been her teachers for most of that time, her first teacher was her sister Isabella, learning headstand and shouldershand in her studio apartment in Montevideo, Uruguay. She has since completed and mentored numerous Yoga Shanti teacher trainings, and taught in studios across Long Island and New York City, making special trips to José Ignacio, Uruguay to teach for her sister at The Shack Yoga studio. Sylvia has a background in various styles of yoga: Hatha, Ashtanga Vinyasa, and Iyengar styles, as well as heated practice, Jivamukti and Anusara styles. Her practice is deeply steeped in the Yoga Shanti method developed by her teachers, and her classes are often challenging but easy to follow, fun and lighthearted! Sylvia is a practicing visual artist with a BA in geology from Oberlin College, and loves to create visual representations, tools, and games to deal with esoteric concepts. When not teaching, she has spent the years since graduating working on farms, in gardens, and with school garden programs on Eastern LI. She is currently (virtually) working towards a degree in Traditional Chinese Medicine at Pacific College in New York.