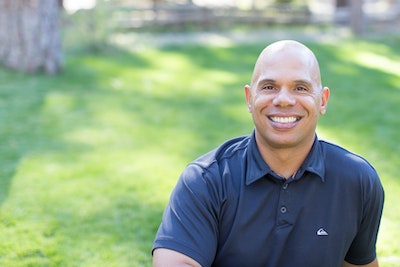 Rolf Gates, author of the acclaimed book on yogic philosophy Meditations from the Mat: Daily Reflections on the Path of Yoga is one of the leading voices of modern yoga. Rolf conducts Vinyasa Intensives and 200/500 Teacher Trainings throughout the US and abroad. A former social worker and US Airborne Ranger who has practiced meditation for the last twenty years, Rolf brings his eclectic background to his practice and his teachings. Born in Manhattan, Rolf
Gates grew up in the Boston area as an avid marathon runner, long-distance cyclist, and champion wrestler. As the descendant of six generations of ministers, he gained an understanding of service and dedication at a very early age.


Rolf and his work have now been featured in numerous magazines to include Yoga Journal, Natural Health and People Magazine and as one of Travel and Leisures' Top 25 Yoga Studios Around the World.


A frequent conference presenter, he was the Keynote Speaker at the 10th Annual Midwest Yoga Conference, IL. Rolf is also honored to be a contributor in the newly released Good Men Project: Real Stories from the Front Lines of Modern Manhood being featured nationally on television and in print to include Ron Reagan's Air America, Fox and Friends, EXTRA and The Tyra Banks Show and more. (All proceeds from this project go to support groups working with men and boys at risk).


Rolf Gates is the co-founder of the Yoga + Recovery Conference, Esalen Institute, Big Sur CA and brought Yoga and Functional
Stretching to the US Department of Defenses' Tri-County Summit on Sustainability. He is pleased to be working with the US Military on sustainable care for the troops and their families. Rolf also works weekly one on one with clients in his Yoga Life Coaching program.


Rolf now lives in Santa Cruz with his wife, Empowered Kids Yoga Teacher and Director, Mariam Gates, and two children, Jasmine and Dylan. He has become an avid surfer and puts his yoga to work on his board and as a husband and father.