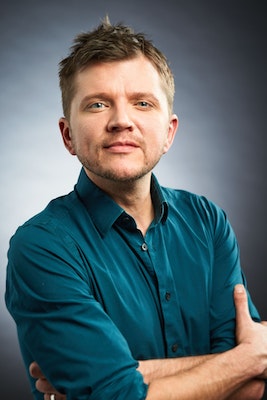 Nick Condon has been improvising, teaching, coaching, and directing  for over two decades. A Minneapolis native, he studied and performed at The Brave New Workshop, the country's longest running satirical comedy theatre. Since then he has performed in nearly every state.

In 2006 he moved to Talkeetna, Alaska where he served as Creative Director of Denali Drama and Iditaprov. While in Alaska he produced, directed, taught, and performed all over the state. He moved to Portland in June of 2016 to teach, perform, and coach at Curious Comedy. He's been a member several troupes in Portland including BattleAx, Pipes:The Improvised Musical, The Nancy Boys, and Solitaire: The Improvised One Man, One Act.

He is also the creative director of Conscious Comedy, socially relevant comedy for a cause, whose mission is to raise funds and awareness for local nonprofits through comedy. When not teaching or performing here in Portland, he can be seen performing, teaching, and creating customized shows, workshops, and events for festivals, corporations, and nonprofits all over the country.