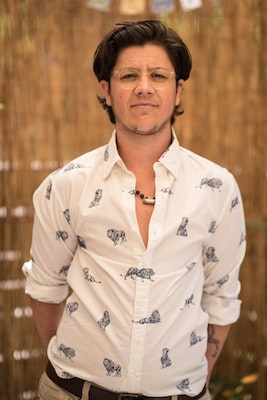 👋 I am Miles Borrero

is a NYC-based yoga teacher who has led sought-after retreats and trainings around the world since 2007. A tireless explorer, Miles has done a deep dive into many lineages: Bhakti, Forrest, Parayoga, Om Yoga, Iyengar, Ashtanga. Over the years, these influences have converged to create a unique hybrid style of teaching that is dynamic, creative, and soulful. The physical athleticism that first drew him to the mat has since inspired deeper inquiries in anatomy, as well as cranio-sacral therapy and osteopathy – techniques that delve into the equally magnificent subtle body and our more mystical selves. As a teacher, Miles is wonderfully skillful and intuitive. He understands technique from the depth of his own practice and is able to articulate it simply and clearly, making it readily accessible to his students. His nuanced and powerful insights stay with you past the duration of his classes. And his chants will crack your heart wide open. His love of people is infectious and has translated into building a thriving community and creating inclusive spaces for all. As an anti-racist Latinx and LGBTQ+ trans activist, his hope is to leave the world a bit better than he found it.


Miles has taught for many of NYC’s prime yoga studios including Om Yoga, the Kula Yoga Project and Pure Yoga. He has contributed to publications such as Mantra, Om Yoga, Embodied Philosophy and Yoga City NYC. You can also find his classes on Apps such as Yoga Wake Up, Om Stars and Yoga International.