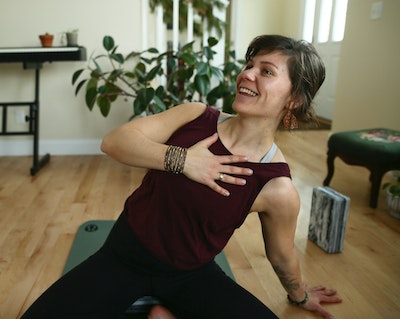 Kierstin (she/her) began practicing yoga during college to relieve stress and anxiety. She quickly learned a whole lot about who she was and the type of person yoga allowed her to become.

In 2014, Kierstin graduated from Liberate School of Yoga under Jane Lanza in Sheldon, VT. Soon after, Kierstin found herself supporting Burlington Yoga Conference and teaching at Frendly Gathering, Sangha Studio, Hotel Vermont and a number of community classes at the local lululemon which she managed.

The snow called Kierstin to Colorado where she continued to be both teacher and student at Bhava Yoga, Meta Yoga, Trinity Wellness Studio, and Meta Hot Yoga Studio.
Vermont called her back (as it always does!) and she joyfully started teaching at her home studio, Sangha again.

Her classes include creative transitions and a flowy rhythm that pairs with her curated playlists. Kierstin’s favorite part of teaching is giving informative and accessible cues - both verbal and physical assists to support students in finding the asana and pranayama that suits them best. Her deeply restorative hands-on assists and encouragement for students separate from ego and judgement to be in their bodies exactly as they are, keep her students coming back to their mats - peeling back the layers to discover more about themselves and the potential of who they can be.