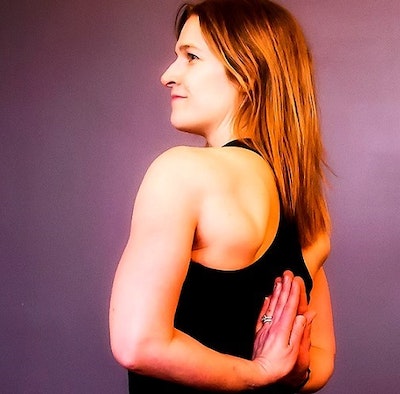 👋 I am Kathy Bennett

Kathy came to yoga through competitive bodybuilding. Lacking the flexibility and grace to move through her bodybuilding routine, Kathy started practicing yoga and pilates with Kathleen Frizzi. Initially, yoga seemed like a poison – just one more chore that had to be completed to compete. But soon, Kathy came to recognize the joy of a sustained and consistent yoga practice – a deep and total connection between the mind and body that she had not achieved through any other form of exercise. After leaving bodybuilding, Kathy dedicated herself to yoga and found her place at The O Yoga Studio in Syracuse, New York, where her practice continued to deepen and eventually led her to the Boston Yoga School Teacher Training Program. Studying under Ame Wren and Tiffany Sisko, Kathy learned the fundamentals of an alignment based Vinyasa practice. But it was through her lessons with Josh Summers and Brenna Matthews that Kathy found her true passion in the practice of Yin and Restorative Yoga, which focus on using the pose to get into the body/mind. Kathy believes that emphasizing safe alignment, learning to sit with sensation, creating the space to allow the mind to work through whatever arises during the practice, and cultivating compassion in our practice and ourselves is the path to holistic healing and wisdom.