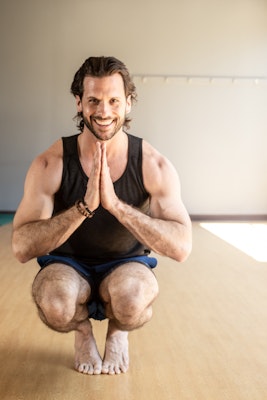 Vinyasa Yoga is a natural fit for John. He completed his RYT-200 at Yoga Six, served an apprenticeship at Zen Yoga Garage, and joined Prison Yoga Chicago as a trauma informed certified Yoga teacher and Executive Board Member. Off the mat, you may find John practicing karma yoga as a mentor in Mercy Homes Friends First Program, serving on the Harris Theatre Associates Board as Co-Vice Chair, while working full time as a Project Manager.

An innate passion for physical activity originally drew John to Yoga. Years of competitive sports including lacrosse, basketball, beach volleyball, kayaking, and four years of college football prepared him for the physical challenges that Yoga provides. It was the meditative and spiritual offerings of the art that captured his active mind and heart. John’s journey took him to the Zen Buddhist Temple in Chicago, an experience integral to leading him on an enlightened path toward Yoga. What captivated John was Yoga’s spiritual and acetic discipline that connects both body and mind and the effects one has on the other and it’s transformative influence on one’s spirit.
As John’s growth and development in the ancient art began to materialize, his confidence strengthened and he felt prepared to share his passion through teaching. Through the positive energy Yoga provides and it’s power to connect with individuals, John guides his students on their enlightened journey with the goal of connection to themselves and the world around them.

John brings an attitude of self-discovery, creativity and fun to every class. Show up to feel empowered physically, mentally, and most importantly spiritually.