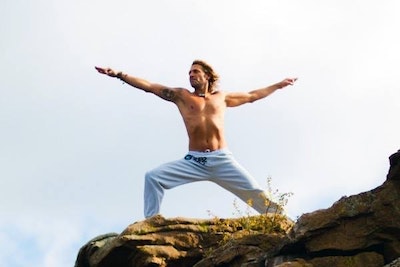 Eric Paskel is known for his rock ’n roll personality in the normally quiet world of
yoga. He is an international yoga teacher, marriage-family and child counselor,
and motivational speaker. He has been a teacher of teachers since 1999,
presenting at Yoga Journal Conferences, Kripalu Center, Bhakti Yoga Fest,
Wanderlust, Telluride Yoga Festival and the Southeast Yoga Festival. Eric has also taken his brand of yoga around the globe, conducting teacher trainings, retreats and
workshops in Russia, Mexico, Costa Rica, India and Belize.
Corporations, like Chrysler and Pilot Flying J, to name just a few, have enlisted Eric’s services as a motivational speaker. For over 20 years, Eric, through his private practice, has been helping clients solve their relationships and addiction problems.
Eric is a featured teacher on both YogaDownload.com and gaia.com.  Yoga Journal’s 14-day program is named after his signature class, Yoga Rocks. He has contributed articles
for Mindbodygreen.com, elephantjournal.com and mantramag.com.  Articles on
Eric can be found in magazines such as People, Shape, Fitness, Mantra, LA
Yoga, First for Women, In Touch, Today’s Yoga and Origin.
Already known as a trendsetter in the yoga world, Eric has added record breaker
to his list of accomplishments. Using Ford Field, home of the Detroit Lions as his
backdrop, he hosted the event, Yoga Rocks Ford Field, breaking the record for
the largest indoor yoga class. He also led the longest yoga chain in Estes Park,
CO at a Yoga Journal conference in 2012.
Eric Paskel founded, owned and operated a family of ten yoga studios in Michigan and California. Yoga Rocks, Yoga Rocks Bootcamp, and Vindalini were just
some of his "signature" classes. One of Eric’s finest masterpieces is the creation of his
Electric Soul Yoga studio. Eric, now has added “author” to his long list of accomplishments.
His book, The Unfucked Code: Transform Your Relationships from Fighting to Uniting, is a realistic “how to” book on creating and maintaining healthy relationships. Families, couples, sisters, brothers, colleagues, employees and employers all have found
harmony in their relationships thanks to The Code. Learn more at ericpaskel.com