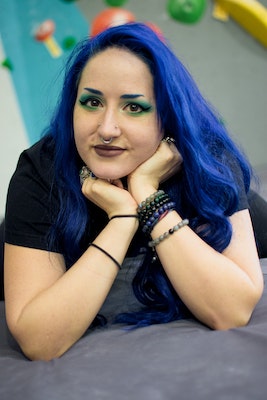 Emily began practising yoga in her late teen years as an accessory to learning belly dance via instructional DVDs. She was introduced to the strength building side of yoga through P90X. Emily continued exploring yoga using at-home media and didn't step foot into a yoga studio until her late 20's. While she's grateful for the ability to learn through self-study, she's learned that there's something so incredibly special about being able to practise in a studio or other group setting - to be able to breathe together and build each other up through yoga.

For years Emily felt the call of yoga - specifically to study more and become an instructor. Following a discussion with the former owner of Transcend (now ASCEND Youngstown) in which she enlightened him regarding the complementary nature of climbing and yoga she began to take her practice more seriously. She took the necessary steps to make a reality of her long-held and quiet dream of becoming a yoga instructor, keeping in mind the goal of eventually teaching with her local climbing gym. Emily was officially certified as an RYT-200 via the EmPower Teacher Training program under Melissa Sebes in May of 2020 and has been teaching since June 2020. She is beyond thrilled to help jumpstart a yoga program with ASCEND Youngstown.