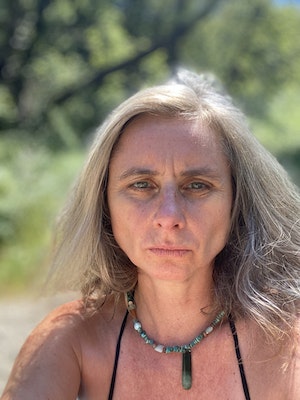 Alexandra (she/her) is a French native who moved to the USA in her twenties. She is an E-RYT 500 yoga teacher and trainer in the fields of Hatha, Restorative, and Prenatal Yoga, as well as Yoga for Teens. She is also a birth doula, as well as an educator in public and independent schools, teaching yoga, mindfulness, and French. As a yoga teacher, her mission has been to teach practices that help bring a peaceful respite from life’s overwhelming pace, and to help others enjoy the present moment in an embodied way. She teaches studio classes at Yoga Garden, and also in the 200-hour and 300-hour teacher training programs at Yoga Garden, including the Prenatal, Restorative, and Kids & Teens Teacher Trainings. She is also a lead teacher and co-creator of Yoga Garden’s Trauma-Informed Teacher Training.
After the traumatic birth of her daughter, Alexandra began studying with Prenatal Yoga teacher Jane Austin, which influenced her to work more specifically with women to promote well-being practices tailored to their specific needs before and after childbirth.
While working in schools, she also became aware of the trauma many children have faced. She came to believe that the path to peace in the world starts with healing and preventing the trauma of women and children. She has studied trauma-informed yoga and somatic practices with Hala Khouri, and holds certifications from Jack Kornfield and Tara Brach’s 2-year Mindfulness Meditation Teacher Certification Program, as well as John Kabbat Zinn’s Mindfulness-Based Stress Reduction (MBSR) program. She is also influenced by Judith Lasater and Spring Washam.
Alexandra is married and has a teen daughter with whom she loves traveling and spending time in nature. Learn more about her at www.alexssiyoga.com.