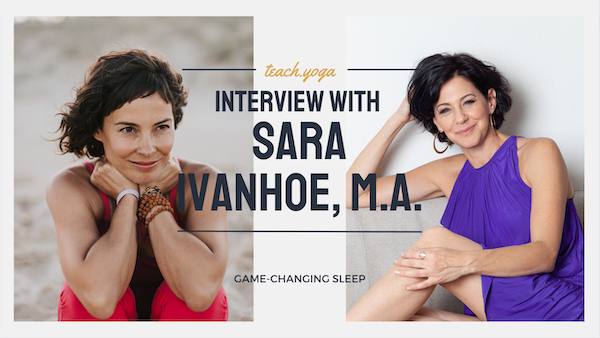 Amy Ippoliti is known for bringing yoga to modern-day life in a genuine way through her intelligent sequencing, clear instruction, and engaging sense of humor. She shares her passion for yoga, health, earth conse...
Play Video
An interview with Sara Ivanhoe, M.A. and Amy Ippoliti on everything sleep.

Sara Ivanhoe is the Founding Director of YogaUSC and a Lecturer in USC’s Mind-Body department teaching Sleep for Peak Performance. She is a doctoral student at the Graduate Theological Union, where she will study to earn a Ph.D. in Yoga Philosophy. Sara's been teaching yoga since 1995, she completed 4, 500 hours of teacher training programs, and has been the Yoga Spokesperson for “Weight Watchers,” “Yoga for Dummies,” “Crunch Yoga,” and appeared as a series regular on “Dr. Drew’s Celebrity Rehab” as the therapeutic instructor. She served as the yoga columnist for Health magazine for three years and has written and appeared in almost every yoga and health publication.


Most recently, Sara partnered with Oprah Magazine to co-create “Just Breathe,” a brand of yoga breathwork and meditation, and was the recipient of USC’s “Sustainability Across Curriculum” grant. Ongoing, she serves as the Yoga and Meditation Strategist for Glo, an online mindful movement class provider.