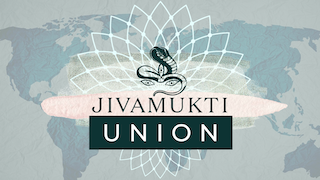 Jivamukti is a physical, ethical, and spiritual practice, combining a vigorous hatha yoga, vinyasa-based physical practice with adherence to five central tenets: ahimsā (nonviolence, non-harming), bhakti (devotion), nāda (music), shastra (study of teachings), and dhyana (meditation.
LaLaLå! – Jivamukti Yoga Los Angeles is the first and only licensed full Jivamukti Yoga ® School on the west coast.Located in the Arts District of DTLA, we are a community yoga school with a global family.  We are artists, activists, and creators of all colors and creeds, shapes and sizes who are dedicated to the teachings of yoga; through art, activism, music and culture, inspired by compassion.
With its roots in NYC, Jivamukti Yoga®was born in the East Village in the 80’s, founded by artist and activists Sharon Gannon and David Life. They cultivated a generation that changed the face of yoga in the west, which in turn renewed its practices around the world
There are Jivamukti Yoga Centers in New York, New Jersey, Berlin, Munich, Luxembourg, Sydney, Barcelona, Paris, Moscow, Norway and upwards of 30 affiliated studios around the world. Each school is independently owned and operated, while remaining connected by teachers, lineage and community of a global tribe.


WHAT IS JIVAMUKTI YOGA?
Jivamukti Yoga® is a path to enlightenment through compassion for all beings