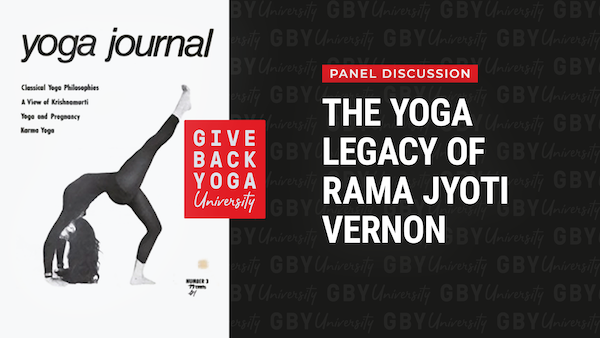 The yoga world lost one of its innovators on November 23, 2020, when Rama Jyoti Vernon passed away. Rama was raised in Los Angeles by parents who were natural healers, grew up in a home filled with New Thought movement leaders, and attended her first yoga class at the age of 15.
In the 60s and 70s Rama sponsored many gurus and swamis on their journey to the U.S. and essentially led the way for the migration of yoga from the East to the West. She started the first yoga teacher training programs and laid the foundation for the first BKS Iyengar Association in the Bay Area. She was also a world peace activist, using a style of conflict resolution she created based on the Yoga Sutras. She organized nearly 50 trips for groups of citizen diplomats to the Soviet Union in the 80s. These interactions among citizens of the U.S. and the U.S.S.R. were considered a force in ending the Cold War.
Rama founded the California Yoga Teachers’ Association, Co-founded the Yoga Journal and initiated numerous organizations including Unity in Yoga, which evolved into the Yoga Alliance.
This special event is being delivered to honor Rama’s legacy and has been planned by some of those who knew her best.
This 90-minute presentation and discussion will include:
About the Panelists:

Ginny Beal began her yoga journey in 1994 through the lineage of Paramahansa Yogananda. Ginny acted as Executive Director of the American/International Yoga College and managed Rama Jyoti’s business. She is a Yoga Alliance E-RYT 500 instructor, and yoga therapist.
Maha El-Sheikh is an international humanitarian and development professional. She is also co-founder of Farashe Yoga for Healthy Living, the first yoga center in the occupied Palestinian territory. She is dedicated to the study of the interconnection of healing, social transformation, and justice.
Sraddhasagar ( Ruth Hartung) is Director of 7 Centers Yoga Arts in Sedona. Currently she is teaching workshops and retreats in Conflict Resolution as a part of Rama’s legacy and Peace Studies curriculum.
Hansa Knox is the Director of PranaYoga and Ayurveda Mandala. Hansa teaches nationally in teacher training and yoga therapy programs. Additionally, she serves on the Boards of the International Association of Yoga Therapists and Sanga, an educational non-profit.
David Lipsius is the former CEO of Kripalu Center for Yoga & Health and former President & CEO of Yoga Alliance and Yoga Alliance Foundation. Today, David advises leading Yoga and Buddhist organizations and teachers seeking to improve strategic planning to enhance social impact.
Mira Murphy began her practice of yoga and meditation in the womb of her mother, world-renowned yoga teacher Rama Jyoti Vernon who initiated yoga organizations, and peace work worldwide.She currently works as an Ayurvedic practitioner, chef and teacher.

Rob Schware heads the Give Back Yoga Foundation and is President Ex-Officio & Advisor for the Yoga Service Council. In late 2006, Rob brought his two decades of management experience with the World Bank to a second career: helping to grow the yoga service movement.

A Note on Seva (Service):


Many of our faculty donate their time and receive no compensation from course fees. The funds we raise through this platform go to support Give Back Yoga Foundation and its key initiatives: mat donations, small grants, and not-for-profit yoga programs for people facing addiction, eating disorders, cancer, incarceration, and PTSD. Learn more about our work here.
← View all Give Back Yoga Foundation Events