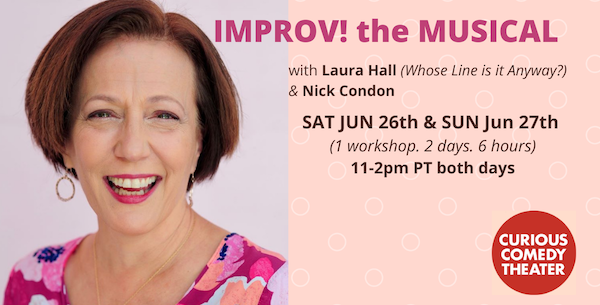 Nick Condon has been improvising, teaching, coaching, and directing  for over two decades. A Minneapolis native, he studied and performed at The Brave New Workshop, the country's longest running satirical comedy ...
This event has ended.
Experience level: Intermediate some improv/musical experience required.

Learn how to create your own Mini-Musicals on the spot! This two day intensive will introduce students to the fundamentals of improvised musical comedy and help take your songs and scenes to the next level. Learn to put your thoughts and emotions into improvised songs that sound like they've already been written as we explore rhythm and rhyme, common song structures with memorable hooks, and how they fit into a greater musical narrative.


Laura Hall is best known as the improvisational pianist on all 17 seasons of the hit television show, “Whose Line is it Anyway?”.  Laura has toured extensively with “Drew Carey and the Improv All Stars” and performed with “Whose Line Live” at the Adelphi, the Palladium, and Royal Albert Hall in London.


Laura got her start in improv as a musical director and composer at The Second City Chicago.
She has performed with numerous improv groups, including: iO Chicago and iO West; The Annoyance Theater in Chicago; ImprovBoston; Arcade Comedy in Pittsburgh, Curious Comedy in Portland, “Opening Night: The Improvised Musical!” in L.A., and “Hyprov” with Colin Mochrie and Asad Mecci.
In the course of her career she’s played with performers as diverse as Robin Williams, Jane Lynch, Keegan Michael-Key, Joe Walsh (of the Eagles), Nicole Parker, Florence Henderson, Andy Richter and Richard Simmons.
Laura and her husband, Rick Hall, teach music improv around the world. She created “Improv Karaoke”, which are tracks for improvisers to learn how to do song improv. She co-wrote the book “The Improv Comedy Musician: The Ultimate Guide to Playing Music with an Improv Group”, and will soon be releasing a series of instructional videos, “A Musician’s Guide to Improv Comedy”, to teach the specialized skill of playing for improv.

Laura has written music for televisions shows, plays and musicals. She’s scored several indie films, including romantic comedies and two award winning documentaries about the holocaust, “After Auschwitz” and “Swimming in Auschwitz”.  She also wrote the music for “The Wheels on the Bus” children’s video series, starring Roger Daltrey (of The Who) as an 8 ft dragon.